A Brief History of Ty Olwen

In 1977 Swansea GP Peter Griffiths asked the National Society of Cancer Relief for guidance and help to establish a hospice in the then County of West Glamorgan and gave talks on the concept of terminal care and the aims of such a hospice. As a result of this a Steering Committee was formed early in 1978 under the Chairmanship of ENT Surgeon Julian Bihari and as enthusiasm for the project grew this evolved in to the Fundraising (Appeal) Committee.

By May 1979 a decision had been made to launch a campaign in support of a scheme to build a hospice in the grounds of Morriston Hospital and to raise a sum of £200,000, being half the estimated £400,000 total cost of building such a unit, with the other half being met by the National Society for Cancer Relief.

The Appeal Committee under the Presidency of Col. J. Vaughan Williams and the Chairmanship of Mrs J.T. Morgan sought to raise funds by any means including a “Buy a Brick” approach, with the Chairman taking her turn in sitting outside St. Mary’s church, Swansea, and organising concerts and many other events. They received enormous support from national and local businesses, organisations big and small throughout West Glamorgan who arranged fund raising events and individual donors.

By April 1980 the Western Mail reported that “Wales’s biggest fund raising drive – for the Principality’s first cancer care unit – has hit its target of £250,000” and the Appeal Chairman cut the first turf in the grounds of Morriston Hospital to mark the site of the £500,000 building programme for the unit to be called Ty Olwen (House of Olwen) after Mrs J.T.Morgan.

By December of that year advertisements had appeared for a Medical Director and a Nursing Officer to work at Ty Olwen and in April 1981 Dr. Peter Griffiths and Sister Gwendoline Cousins took up their posts working out of an office on St. Helens Rd, commissioning, furnishing and equipping Ty Olwen, and forging links with family doctors.

The Ty Olwen trust was formed in April 1981 with the balance of funds raised for the appeal when it was realised that continued financial support would be needed to ensure Ty Olwen would continue to be equipped to the highest possible standards.

In September the building was handed over by Mrs Morgan to the Chairman of the West Glamorgan Health Authority and with the staff appointed and inducted Ty Olwen opened its doors to the first patients on the 1st October 1981. The Unit was officially opened by HRH Duchess of Kent in May 1982.

In 1989 it became clear that the service being provided by Ty Olwen had outgrown the space at the Unit and a public appeal was launched to build an extension to house a purpose built Day Centre and kitchen, Chapel, Physiotherapy room, Therapy areas, Library, lecture rooms and a larger office for the Home Care teams.  The target was £750,000 and this was raised in just under 2 years with the new extension being officially open by HRH Duchess of Kent in 1991.

In 2005 it became evident that the ward area at Ty Olwen was starting to show its age and a major refurbishment programme was planned.  We were fortunate to secure £750,000 from Lottery funding with the Ty Olwen Trust contributing the remaining £150,000.  The Unit was redecorated and brought up to date with new beds and furniture as well as receiving the necessary attention to comply with Health and Safety and Infection Control.

The inpatient unit refurbishment programme within Ty Olwen was completed, and formally opened by the Duchess of Gloucester in June 2007. The patients now enjoy en-suite facilities, together with a new purpose built day room for them to use. 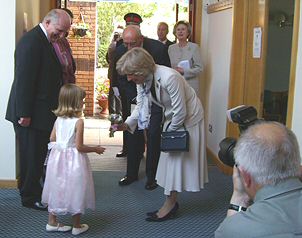